Watching a video on a computer of a video of a TV broadcast video of a crackling fire... how surreal is that?

I may pop in between now and the New Year, or maybe not, but I wanted to wish everyone Happy Holidays! May they be safe, warm, and real. (Or surreal, if you prefer!)
Posted by Jennifer Thermes at 8:56 AM 8 comments:

No map today. My sense of time is all thrown off by the snow we got over the weekend. It was beautiful! But now it's time to play catch up with holiday preparations that didn't get done, on account of shoveling all that snow.

Of course, nothing stops our pet deer from coming around... 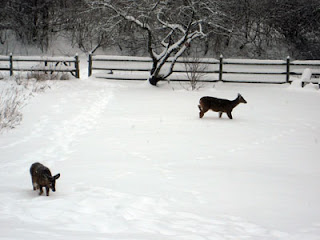 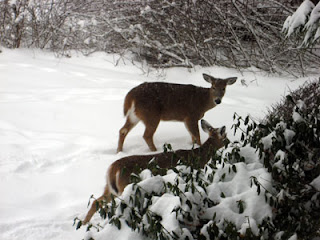 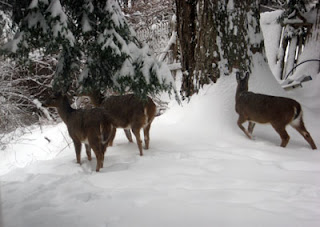 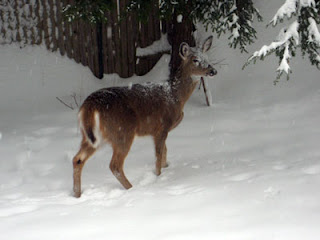 Posted by Jennifer Thermes at 9:12 AM 11 comments:

I love this version! Does anybody remember Brian Setzer from the Stray Cats back in the 80's?

(Snowstorm update: No school today, and it hasn't even started snowing. So much for us hearty New Englanders! But the kids are happy. Me too.)
Posted by Jennifer Thermes at 6:12 AM 6 comments: 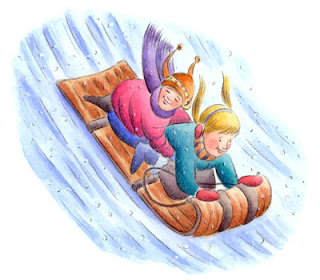 Well, Monday's supposed storm brought nothing but a little freezing rain, but I think we're really going to get it tomorrow. They're talking 4 to 9 inches around here. Whee!
Posted by Jennifer Thermes at 9:10 AM 5 comments: 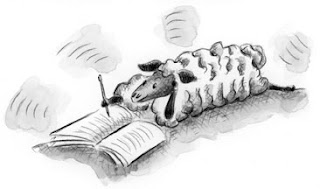 I like writing in a old-fashioned paper notebook, too.
Posted by Jennifer Thermes at 9:24 AM 2 comments:

How Many Maps Could A Map-Maker Make if a Map-Maker Could Make Maps?

A few weeks ago Christine asked how many maps I've created. Wow-- good question-- I'd never stopped to count them! (It's a funny sensation-- you spend years with your nose close to the drawing board and when you suddenly look up at the big picture it dawns on you how much you've accomplished.)

So I pulled out my handy dandy pencil, pad, calculator, and accounting book. This is what I came up with:

In the beginning I did a lot of design work for my former employer and others. The map illustration work grew slowly for the first few years, until it finally took off and I was able to do it exclusively.

That's a roughly accurate number, and it's probably higher, since in the beginning I did a lot of samples for my portfolio. (And some assignments were for multiple maps, which, silly me, I didn't record.)

The number of maps doesn't necessarily correlate with how much money I've earned in any particular year, since they've been of all different sizes and complexities-- not to mention the depressing fact of falling illustration budgets over the last 10 years.

But I've survived-- through babies being born, house moves, heart attacks, bursting economic bubbles (and faulty appendixes, oh my!) It's been an interesting ride, and right now it looks even more challenging than ever. But I'm an optimist. I think you have to be, in order to attempt to make a living as an artist. (Or maybe I'm just delusional. Either way, it keeps me going.)

I have to say that when I quit my full-time job I was terrified of the uncertainty of freelancing. But I was fortunate to have a lot of supportive freelancer-friends to go to for advice.

And at some point, after a few years, it dawned on me that I'd really learned how to navegate this crazy juggling act of a life from the best-- my Dad-- who loves what he does for a living and who'd always managed to keep his own business going, though all sorts of ups and downs. We were as happy and normal kids as any, despite the pressure that he was under. In my opinion, that's what success is all about. (Thanks, Dad!)
Posted by Jennifer Thermes at 9:48 AM 11 comments:

Monday Map: Lincolnton on the Page 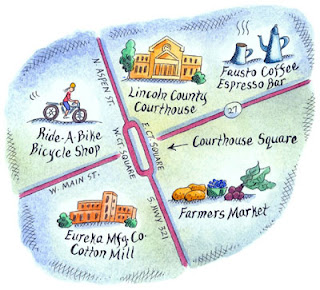 Here's a map in context on the page. (The scan is awful!) 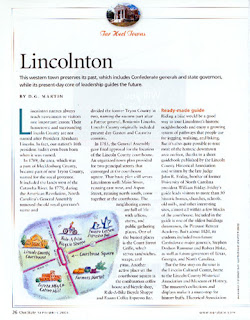 Posted by Jennifer Thermes at 7:57 AM 6 comments:

Friday Fun: Rolling Hamsters Eating Popcorn on Pianos. Or Whatever.

Yesterday Barbara mentioned the spinning wheel that hamsters love (especially in the middle of the night.) We also bought one of these ball-thingys. Drives the cats crazy.

And Julie reminded me of this video... which my daughter has made me watch about a million times... just when I finally got the song out of my head... uh... thanks... Julie...
Posted by Jennifer Thermes at 8:48 AM 6 comments: 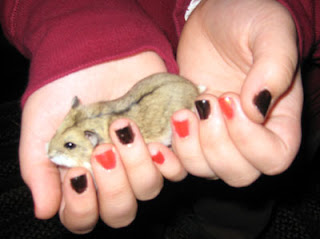 I let my daughter get a hamster.

The house mice must be beside themselves.
Posted by Jennifer Thermes at 8:51 AM 13 comments:

Email ThisBlogThis!Share to TwitterShare to FacebookShare to Pinterest
Labels: hamsters, life, what was I thinking? 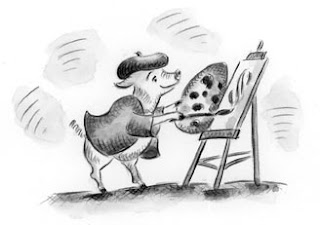 Yep-- Wednesday's turning into black and white day!
Posted by Jennifer Thermes at 7:33 AM 5 comments:

LIFE magazine photo archive.
(Apparently this is only part of the collection-- they'll be adding to it every day.)
Posted by Jennifer Thermes at 8:47 AM No comments: 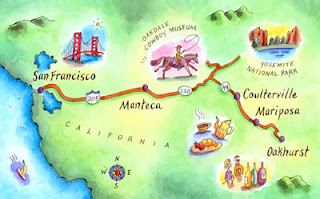 I'll bet it's warm in California right now. It was 15 degrees here this morning...BRRR!!! But there was spectacular sunrise-- a beautiful way to start the week.
Posted by Jennifer Thermes at 8:03 AM 6 comments:

Friday Fun: Sounds Like a Great Idea to Me

(Via Galleycat)
Posted by Jennifer Thermes at 7:16 AM 4 comments:

I love lists. They lead to ideas.

Alicia did this one over at her blog. I've done the things in bold. If you want to play, copy the list, bold what you've done, and let somebody know you've posted. (Oh, and delete my comments!) This got me thinking to things I wanted to add...

1. Started your own blog
2. Slept under the stars
3. Played in a band (for about 5 minutes)
4. Visited Hawaii
5. Watched a meteor shower
6. Given more than you can afford to charity
7. Been to Disneyland (does Disneyworld count?)
8. Climbed a mountain
9. Held a praying mantis
10. Sang a solo (not very well, but with a guitar!)
11. Bungee jumped
12. Visited Paris
13. Watched a lightning storm at sea (from the beach.)
14. Taught yourself an art from scratch
15. Adopted a child
16. Had food poisoning
17. Walked to the top of the Statue of Liberty
18. Grown your own vegetables
19. Seen the Mona Lisa in France
20. Slept on an overnight train
21. Had a pillow fight
22. Hitch hiked
23. Taken a sick day when you’re not ill
24. Built a snow fort
25. Held a lamb
26. Gone skinny dipping
27. Run a Marathon
28. Ridden in a gondola in Venice
29. Seen a total eclipse
30. Watched a sunrise or sunset
31. Hit a home run
32. Been on a cruise
33. Seen Niagara Falls in person
34. Visited the birthplace of your ancestors (some of them)
35. Seen an Amish community.
36. Taught yourself a new language
37. Had enough money to be truly satisfied (Depends. No, only because I'd like to not worry about paying the bills. But yes, because I know people with a LOT of money, and it seems they'll never be satisfied. I don't understand that.)
38. Seen the Leaning Tower of Pisa in person
39. Gone rock climbing
40. Seen Michelangelos David
41. Sung karaoke
42. Seen Old Faithful geyser erupt
43. Bought a stranger a meal at a restaurant (Gave pizza to a homeless man in NYC.)
44. Visited Africa
45. Walked on a beach by moonlight
46. Been transported in an ambulance (Damn appendix!)
47. Had your portrait painted
48. Gone deep sea fishing
49. Seen the Sistine Chapel in person
50. Been to the top of the Eiffel Tower in Paris
51. Gone scuba diving or snorkeling (Snorkeling in the Virgin Islands.)
52. Kissed in the rain
53. Played in the mud
54. Gone to a drive-in theater
55. Been in a movie
56. Visited the Great Wall of China
57. Started a business
58. Taken a martial arts class
59. Visited Russia
60. Served at a soup kitchen
61. Sold Girl Scout cookies
62. Gone whale watching
63. Got flowers for no reason
64. Donated blood, platelets or plasma
65. Gone sky diving
66. Visited a Nazi Concentration Camp
67. Bounced a check
68. Flown in a helicopter
69. Saved a favorite childhood toy
70. Visited the Lincoln Memorial
71. Eaten Caviar (Yum!)
72. Pieced a quilt
73. Stood in Times Square (Just last week!)
74. Toured the Everglades
75. Been fired from a job (Lunatic restaurant owner, really!)
76. Seen the Changing of the Guards in London
77. Broken a bone (My thumb, on a trampoline. How silly!)
78. Been on a speeding motorcycle (Once was enough, oh brother-of-mine!)
79. Seen the Grand Canyon in person
80. Published a book
81. Visited the Vatican
82. Bought a brand new car
83. Walked in Jerusalem
84. Had your picture in the newspaper
85. Read the entire Bible
86. Visited the White House
87. Killed and prepared an animal for eating
88. Had chickenpox
89. Saved someone’s life
90. Sat on a jury
91. Met someone famous
92. Joined a book club
93. Lost a loved one
94. Had a baby
95. Seen the Alamo in person
96. Swam in the Great Salt Lake
97. Been involved in a lawsuit
98. Owned a cell phone
99. Been stung by a bee
100. Read an entire book in one day
Posted by Jennifer Thermes at 9:01 AM 8 comments: 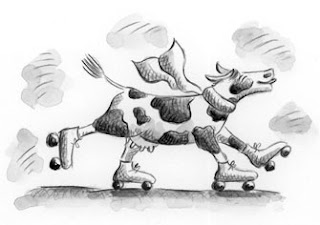 I'm playing around with black and white images. And, of course, Blogger has a mind of it's own when it comes to tones and color...

I forgot that black and white is tricky! This is pencil and wash on paper, so the wash part handled differently than on the watercolor paper I usually use. It felt looser. Maybe a good thing? I'm still pondering...
Posted by Jennifer Thermes at 7:58 AM 7 comments: 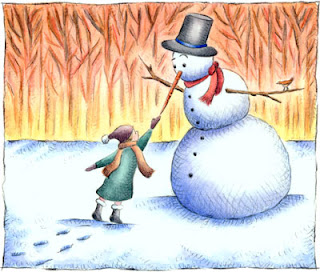 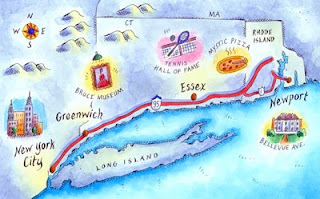 For the last few years we've made it a tradition to trek in to New York City on the day after Thanksgiving (along with about a million other people.) Not to shop, but to walk around and sightsee and have lunch (and bargain with the street vendors over scarves-- such deals!) This year a few more family members joined us. We had a blast.
Posted by Jennifer Thermes at 8:34 AM 10 comments: