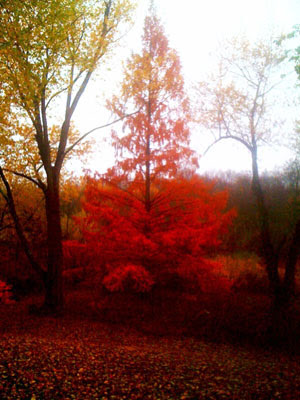 Posted by Jennifer Thermes at 8:17 AM 2 comments: 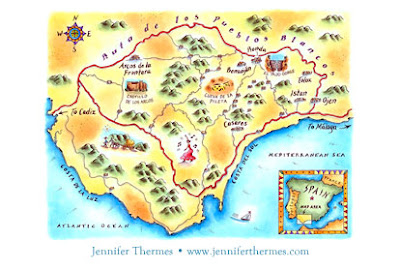 It's been way too long since I've done one of these. My oh my, time flies!
Posted by Jennifer Thermes at 8:56 AM 5 comments:

Email ThisBlogThis!Share to TwitterShare to FacebookShare to Pinterest
Labels: I want to go to Spain please, Illustration, maps, promotion

What's On My Desk

This week I'm working on endpaper illustrations and a few other bits and pieces for Maggie and Oliver, a middle-grade novel by author Valerie Hobbs.

There's always a stage in the process where I think the art looks like blech. Most times I can work through it. (Figured this out after years of self-torture.) 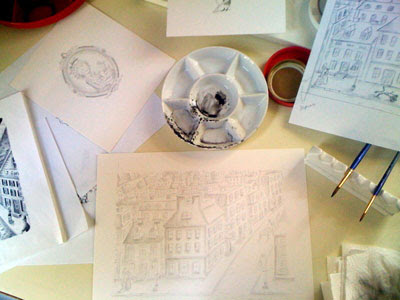 Usually my desk looks something like below. My hairy little assistants are always ready to help. (Between nap breaks, that is.) Luckily I also have a standing desk. Keeps the ol' spine happy. 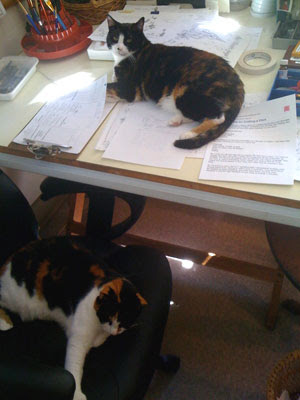 Here's another piece from the book: 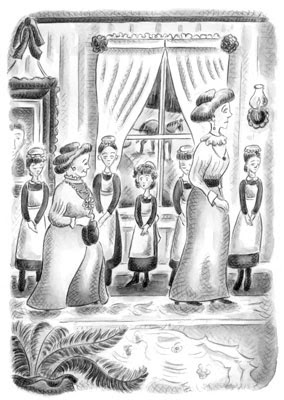 Posted by Jennifer Thermes at 8:15 AM 6 comments:

Email ThisBlogThis!Share to TwitterShare to FacebookShare to Pinterest
Labels: cats rule the world and don't you forget it, chapter book illustration, maggie and oliver, valerie hobbs, what I'm working on now

On Saturday I was thrilled to get up at the crack of dawn to attend the Rutgers One-on-One Plus conference for the second year in a row. (I really was thrilled. I'm a ridiculously early riser anyway, and besides, that's why coffee was invented.)

Last year was fabulous, and I expected this year to be the same. It was. For those who aren't familiar with the conference, attendees are paired with a mentor– an editor, agent, author or illustrator– who spends 45 minutes giving feedback on your work.

This year I met with a lovely author who offered many insightful suggestions for my picture book dummy... ones that I think will help take it to another level. Meeting her was just one of the delightful surprises of the day!

There was also a great panel of speakers– Deborah Sloan, Alvina Ling, and Katie Davis– who talked about the value of social networking and some of the ins and outs of Facebook and Twitter. Check out #rcclbuzz on Twitter if you want to learn more. (Dear Twitter, I do love you, but have a hard time keeping up!)

Oh! And I can't forget the 5-on-5 group, where groups of five mentees and mentors meet to discuss whatever burning questions about the industry anyone might have.

The grand finale of the day was keynote speaker, the awesome Deborah Heiligman. (She really is awesome, and not just because she handed out waterproof notebooks to everyone in the audience in case we find ideas in the shower! If you ever get a chance to hear her talk, do it.) Deborah was funny and inspiring. Instead of me trying to paraphrase what she said, here it is in her own words. And here's another take.

Good, good stuff. Heading off to my bubble now...
Posted by Jennifer Thermes at 9:56 AM 3 comments:

...James McMullan's series in the New York Times about the basics of drawing; because there are so many different approaches to drawing and always something new to learn.
Posted by Jennifer Thermes at 9:41 AM No comments:

These are two little sketches for part of the Maggie and Oliver endpapers. The editor and designer liked the one on the left. (Me, I couldn't decide! I'm bad like that.)
Posted by Jennifer Thermes at 8:32 AM 3 comments:

Email ThisBlogThis!Share to TwitterShare to FacebookShare to Pinterest
Labels: chapter book illustration, maggie and oliver, what I'm working on now 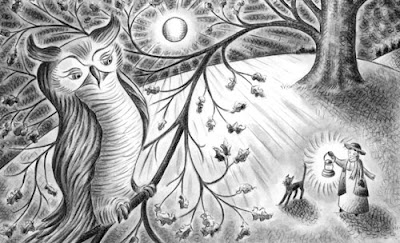 Here's the finished piece. This was the sketch. I tweaked it around a bit in order to fit my postcard design.
Posted by Jennifer Thermes at 10:08 AM 10 comments:

Email ThisBlogThis!Share to TwitterShare to FacebookShare to Pinterest
Labels: black and white, can you be a night owl and an early bird?, Illustration, New Work 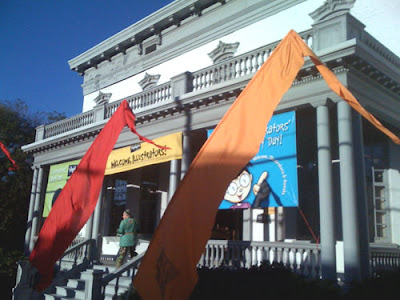 This past weekend I went to my first Highlights Illustrators' Party at their company headquarters in Honesdale, Pennsylvania. Wow, what a nice group of people– they sure know how to make you feel welcome! My buddy Julie and I drove out together, and one of the first things we commented on as we pulled into town were all the "Welcome Illustrators!" signs. Where else on earth would you ever see that? So cool!

People came to the party from all over the country, and Canada, too. One of the best surprises was meeting so many online folks in person– Susan Mitchell, Paula Becker, Jannie Ho– and a whole bunch of others. It was great to spend time talking face to face while we ate, listened to a presentation by the staff, ate, looked at each others artwork, ate, sat by the lake, ate, dressed up in costumes, ate, square danced (some of us!), and ate some more. (Did I mention that the food was delicious?)

Thanks, Highlights, for a wonderful time!
Posted by Jennifer Thermes at 9:23 AM 6 comments: