I think it would be a great idea to try singing your picture book text as you're working on it. Is it musical? Does it have that lovely, spare, lyrical flow like the best picture books do?
Posted by Jennifer Thermes at 9:03 AM 5 comments:

"The festival is named to honor Robert Lawson, the only author/illustrator to win both the Caldecott and Newbery Medals for excellence in children's illustration and literature."

...what one editor hates, and likes.
Posted by Jennifer Thermes at 9:12 AM 3 comments: 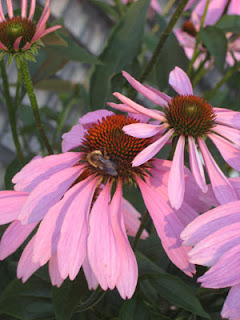 Between new braces for our boy, end-of-summer bashes, and school beginning, we're busy bees around here.
Posted by Jennifer Thermes at 8:58 AM 5 comments: Posted by Jennifer Thermes at 9:14 AM 2 comments:

Love that water-skiing Dalmatian!
Posted by Jennifer Thermes at 9:23 AM 6 comments: 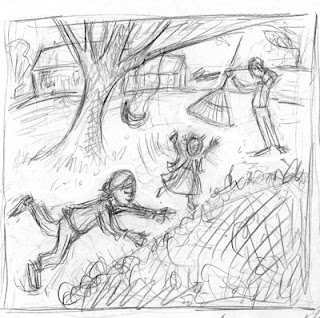 Well, obviously I've been doing more sketching lately than finished pieces. It's just easier to fit in between map work and other ongoing projects. Also, I find sketching more relaxing and enjoyable than anything. Time to take these babies to the next level though. I'll post them as I get to them.
Posted by Jennifer Thermes at 9:25 AM 8 comments: 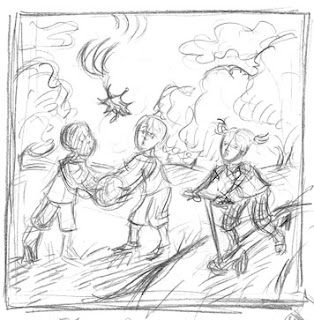 Woke up this morning to temperatures in the 50's and crystal clear sunshine. Beautiful! But it feels like September already.

I overheard a guy in the garden center saying that as far as he's concerned, June is the new July, August is the new September, etc. Judging from the weather we've had this summer, I'd say he's correct.

Ah well, my head is in September anyway, as the kids go back to school a week from today. Where did the summer go?
Posted by Jennifer Thermes at 9:45 AM 6 comments: 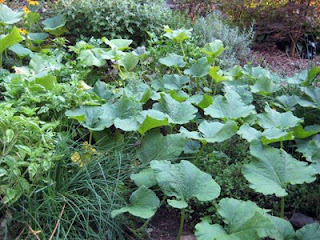 This strange looking vine with huge leaves popped up in our little side garden at the beginning of summer. I decided to leave it, figuring it was some sort of seed that sprouted from the undercooked compost I'd put down. And besides, by mid to end summer the roses usually looked fairly ratty, so at least it would add some green. But what was this mystery vine? We soon had a clue.... 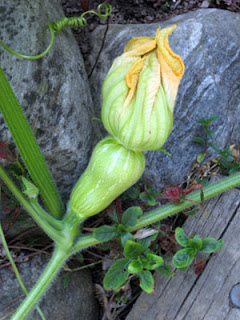 Could it be a Butternut Squash? 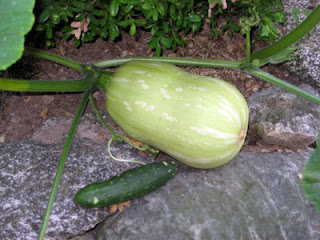 It was! It was a Butternut Squash! So we cooked it up. Yum! We should have let it ripen a bit more on the vine, but it was delicious, anyway. 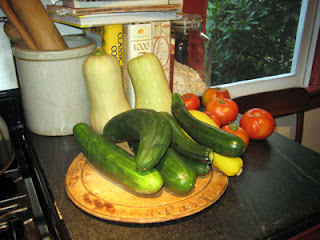 We've also been growing cucumbers, zucchini, yellow squash, tomatoes and peppers. This was our first year experimenting with container vegetables. Not everything has been a bountiful success, but we did okay, considering the strange weather. (At least we kept the deer away!) We'll experiment some more next year. 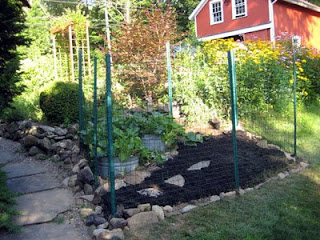 It feels good to play with a garden, or a story, or a piece of art...
Posted by Jennifer Thermes at 9:28 AM 7 comments:

Ooh, Vermont in the summertime. I want to go!
Posted by Jennifer Thermes at 9:09 AM 7 comments:

Friday Fun: Medicine For All

Watch until the end for John Cleese's comments... excellent...
Posted by Jennifer Thermes at 8:09 AM 6 comments:

... And sometimes the answer is right in front of your face. It's just not what you expected.
Posted by Jennifer Thermes at 8:15 AM 5 comments:

Two Steps Forward, One Step Back is Still Moving Forward 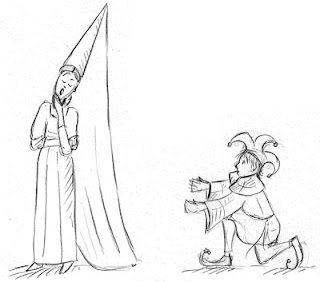 Sometimes you have to beg a story to tell you what it really wants to be.

Darcy Pattison is doing a great series during the month of August called 30 Days to a Stronger Picture Book over at her blog. Check it out!
Posted by Jennifer Thermes at 9:02 AM 2 comments:

"It's difficult to be creative in spite of the general cussedness of life, but it gets easier once you realize that creativity is a marvelous way to transcend life's little problems– like threats of war and terrorism, economic chaos, intimations of mortality, and the sneaking feeling that you have accomplished absolutely nothing all week."
– from How to Enjoy Writing: A Book of Aid and Comfort, by Janet and Isaac Asimov
Posted by Jennifer Thermes at 9:44 AM 5 comments: Posted by Jennifer Thermes at 9:10 AM 2 comments:


Posted by Jennifer Thermes at 9:14 AM 5 comments: 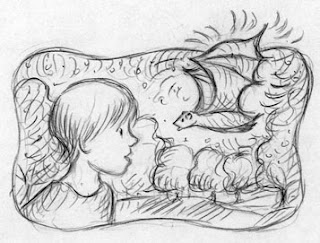 Don't worry, I'm not suffering any post-bat trauma or anything-- just having fun drawing them!

This was for my daily exercise, though it did take longer than 15 minutes. (I think the point is to draw or write for at least that time, right?)

I was thinking about one of my favorite Dr. Seuss stories while drawing this, called What Was I Scared Of?, from this book. It's about a child who's afraid of "a pair of pale green pants with nobody inside!" They meet under different circumstances and the child is terrified until he realizes "That I was just as strange to them as they were strange to me!" After that they are friends. 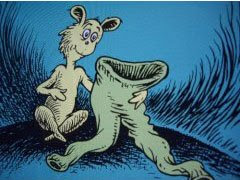 From The Sneetches and Other Stories, by Dr. Seuss

I sometimes wonder if Dr. Seuss wrote his stories more for adults than for kids. (Check out The Sneetches to see what I mean...)
Posted by Jennifer Thermes at 8:30 AM 5 comments: 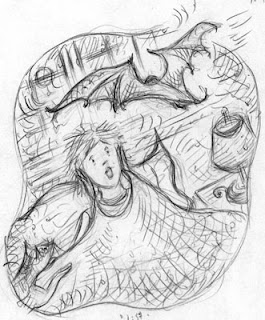 My little nocturnal visitor tested negative for rabies. Yay! No shots, and one more thing to cross off the "to-worry-about" list.

I'm sure he was just as scared of me as I was of him, poor little guy.

A bat's wing construction is fascinating. I don't know if I've quite gotten the hang of it here. (He wasn't this big in real life either... but he sure seemed that way in the dark!)
Posted by Jennifer Thermes at 9:22 AM 10 comments:

Hit in the Face with a Bat

That sounds so wrong, doesn't it?

But I was, this past weekend.

Not the baseball kind-- the animal kind. (Ahh, the imprecision of language!)

Early Sunday morning I was half asleep and vaguely aware of the cats racing and clunking around the house. Probably chasing a mouse, I thought. A usual occurrence in our old house. But when one of the cats barreled up the staircase onto my bed in hot pursuit of said "mouse" I thought... "Damn cat! There'll be no mice in this bed!" And bolted upright...

... only to be smacked in the face with the creature she was chasing. It was no mouse! It swooped back and forth and around a few times before hubby managed to whoosh it toward the bathroom with a towel and slam the door.

And I had a nifty little scratch down my cheek.

Good news-- we'd all had the complete set of rabies vaccine about 3 or 4 years ago after a similar incident of bat-in-house. (Even though we were sure no one had come in contact with it, but our family doctor had said-- "Get thyselves to the emergency room this instant." They take it seriously. Rabies has a 100% fatality rate. Would you take a chance?)

Good news-- Hubby caught the bat and we've sent it off to be tested.

Bad news-- They have to kill it in order to do that. I actually feel badly for him. I like bats!

Pain-in-the-Neck news-- I spent 3 hours in the ER only for them to tell me they'd wait to hear the results before giving me booster shots, since I already supposedly have some protection. (Though nobody seems to know how long the vaccine is good for...)

Good news-- We'll hear the results in a day or two. And the shots really aren't too bad if we have to get them. Unlike the old days, when they gave them in the stomach. (Ack!)

Let's just hope everybody knows what they're doing...

Here's a not-so-great shot of the little critter: Posted by Jennifer Thermes at 8:58 AM 7 comments:

Monday Map: Take Me to the River (The Cape Fear River, That Is) I can't watch that movie with Robert DeNiro... what is it called? Is it "Cape Fear?" Anyway, I admit it, I'm a wimp. When the music turns scary, I turn the channel.

Speaking of scary-ish, tune in tomorrow for an episode of My Adventures with Wildlife, from this past weekend. I think I'm going, um... batty. (Hint, hint!)
Posted by Jennifer Thermes at 8:54 AM 2 comments:

Email ThisBlogThis!Share to TwitterShare to FacebookShare to Pinterest
Labels: maps, Our State magazine

These videos have been all over the place recently, and I didn't want to lose track of them. If you've never heard Ira Glass's program This American Life on NPR I highly recommend it. I've spent many a Saturday afternoon working or cooking a meal and listening.

I especially like the third piece, where he talks about how important it is to create lots of work, in order to develop good work. In other words, don't quit when you're frustrated-- everybody goes through it. So get yourself a cup of tea (hot or iced, depending on your climate), sit back, and enjoy. And then get creating!


Posted by Jennifer Thermes at 9:37 AM 4 comments: