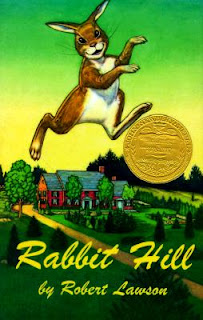 This past Saturday I joined two of my writing group buddies again, at the Rabbit Hill Festival of Literature, where we were treated to presentations by a group of awesomely talented authors and illustrators.

I took sparse notes, preferring rather to look and listen. Plus I forgot to bring my reading glasses, so I couldn't see what I was scribbling. (But you can make out the pigeon that Mo Willems taught the audience how to draw): 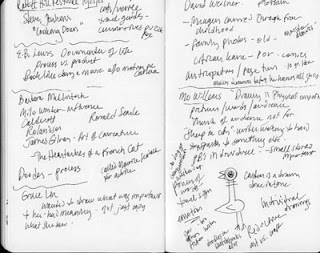 Steve Jenkins was interested in science at a very young age. His love of the natural world influences his art.

E.B. Lewis calls himself an "artistrator," and considers himself a documentor of life. For him the joy of making art is more in the process than the final product. He approaches illustrating a book like making a movie, but without the motion picture camera.

Barbara McClintock doodles a lot in her sketchbook as a way to inspire ideas. When she was just starting out and living in North Dakota, she phoned Maurice Sendak in New York to ask his advice on how to become an illustrator. And he graciously talked to her for 20 minutes!

Grace Lin's stories and art are inspired by her Chinese heritage. She wants to create art that has important personal meaning for her.

David Wiesner is a visual storyteller who uses unique points of view in his artwork. Much of his imagery is inspired by his childhood in New Jersey.

Mo Willems thinks of his audience while writing. As an author he wants to get out of the way and let the reader bring something of themselves to the story. He considers himself a craftsman rather than an artist. He spoke about the power of words, and also about the importance of encouraging kids to draw. "Drawing is physical empathy," as he put it, and the individuality of each person's drawing is important. (He is also quite possibly the funniest person on earth.)

For more detailed notes, click here. (Thanks, Julie, for the link!)
Posted by Jennifer Thermes at 8:38 AM

Oooh, nice pigeon. I want to try it!

You should! He talked the audience through the drawing line by line and pointed out that even though we were all drawing the same thing, no two looked alike. That individuality was a good thing. Cool exercise!

Oh how awesome Jen. I love David Wiesner, he spoke at the winter conference and I was amazed at how humble he is and how much work he puts on those books. It takes him years to finish them! So inspiring...

I agree, Alicia. He said his watercolor technique calls for putting painstaking layer upon layer... so hard to do without turning it into mud! But his work is worth waiting for. :-)

Thanks Jennifer!! What an amazing line up. I'm so jealous. :) That's an awful lot of talent in one place. And I heard you got to see some E.B. Lewis originals! Holy moly! Wish I could've been there.

Hi Gail-- It really was incredible. I couldn't believe it was free!

I didn't get to see the originals, as I went to Mo Willems and David Wiesner's breakout sessions in the afternoon. Believe me, it was hard to choose!

Free?!! Really! That would have been worth a plane ticket.

I bet it was hard to choose breakout sessions.

Oh I should clarify-- Saturday was free, but there was a charge for Friday's author dinner. But still! :-)